I now have stock of a range of 4HP and 8HP front panels to suit the Synovatron DIY Prototyping Kits. These can be purchased with the kits as an option or separately. 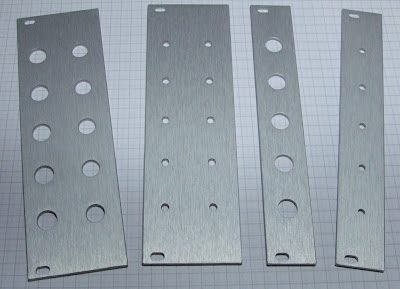 The panels will also include a set of M3x6 screws and plain washers.


Update:
Here's a 8HP pilot hole panel that I drilled out for a customer so he could mount a mult on the left and an OSC303 on the right (Note: he bought the OSC303 as a kit without front panel and jacks. There's no point in trying to do this if you have one DinSyncs's excellent clear blue panels). The jacks were drilled out to 8mm, the pot to 7.5mm and the switch to 6mm. Looks pretty sexy!
Tone's top tips:
(1) Cover the panel in masking tape so the swarf doesn't scratch the front finish.
(2) start with smaller drill sizes and work up to the final size else you may end up with odd shaped holes.
(3) Deburr holes on both sides with a countersink bit.

Synovatron
Portsmouth, United Kingdom
I am an electronics design engineer with a long interest in all things synth. Ever since I attempted the Practical Electronics Minisonic synth project in 1973 I have been a synth fan. I have some very nice synths: Two Sequential Circuits Pro Ones with Synthwood kits, a Roland SH09, SH5 and 100m modular, Moog Voyager and Korg ARP Odyssey (FS white face). I also have an evergrowing Eurorack modular system. I run a very small part-time business called Synovatron Limited which caters for the modular DIYer and produces 'boutique' modules and accessories. Most of the product range is aimed at synth interconnectivity - interfacing 'tools' that enable one type of synth to control another type

Some of my toys 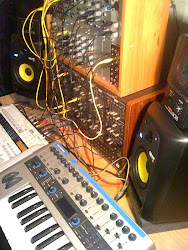 Some nice people who have taken an interest

Check out these blogs too

Where else you can find me